“What Don doesn’t know about Porsche isn’t worth knowing. We are proud that this depth of knowledge underpins the service we offer on any model Porsche”

Testimonials
“Don and the guys at DHM are on their game with everything Porsche. I used to take my 930 Turbo there and they did a very well priced engine rebuild for me. The car always performed faultlessly and they really looked after me. Now they’re looking after my 997S and they really do know their stuff. Thanks guys – always feel confident in your work and would highly recommend”
Darren Bowman

“Big thanks to DHM . Great team of guys and perfectionist. Highly recommend them. Thanks again lads”
Sean Murphy

“After Don and the boys put in new clutch and syncros in the Turbo running like a charm. Thanks again DHM team Great Job”
Peter Twyford

“My first time with DHM, massively impressed with the professionalism and thoroughness of the team. Don kept me apprised of all the work that needed to be done, sourced the parts quickly and got the car back on the road very quickly, and all at a very reasonable rate”
Matt M.

“I approached DHM Motorsport to seek advice on and subsequently undertake the conversion of my 1977 Porsche 911 wide body to a road registered track day capable standard.

Don provided obligation free advice and subsequently undertook extensive work on the vehicle which included an upgrade to a 3.6 litre engine which achieved 304hp at the rear wheels, extensive work was also carried out to the vehicles suspension, brakes, and drive line resulting in a vehicle that is both extremely capable on the track and a delight to drive on the road.

All work was carried out to a very high standard and Don’s desire to “get it right first time ” was evident.

I would strongly recommend DHM Motorsport to anyone looking for either general service and advice or a conversion or update of your vehicle.”
Ian Gall, 15 May 2014

“I would highly recommend DHM Auto Solutions to anyone contemplating having their Porsche maintained, modified or restored.

Don Munro and his team first started servicing my 1978 911SC and when I decided that I wanted to buy a 993 I turned to Don for his expert advice and guidance. Don guided me through the purchase, recommended a mechanic in Sydney to do the pre purchase inspection for me and liaised with that mechanic regarding the inspection report. Since buying my 1996 993 it has been exemplarily maintained by Don and his team.

My experience has always been one of a very high level of personal attention to detail together with an extremely good knowledge of the Porsche brand. I also have the peace of mind that all aspects of the car have been taken care of by highly qualified mechanics.

At the end of the day it is all about trust. You have to trust the mechanic who you are handing over your pride and joy to. I would not want my 993 looked after by anyone else but the team at DHM Auto Solutions.”
Pauline Smith, 26 May 2015

I had my 1968 Porsche 911 in at DHM for a complete motor rebuild in early 2015. The car is a very original one, and in that context I decided to stay with the standard capacity and original build specifications.

I found DHM to have outstanding facilities, and clearly a strong reputation among Queensland and Australian Porsche owners and associations. After a long discussion with Don Munro, the Principal, I felt assured that my car was in good hands. Now, as most know, old magnesium engine cases are tricky things to rebuild. Mine needed a good deal of specialist engineering and strengthening to ensure that the job was done correctly. It would have been easy to cut corners on several aspects of the rebuild.

But that is not Don’s way. It is done the right way and with care and perseverance.

Throughout the rebuild a strong sense of trust built up between us and I am extremely pleased with the outcome. Don would be one of only a handful of people across Australia who can rebuild these old motors to high standard. He also can summon the services of the very, very few specialist engineers who know these old motors. The price was less than I had estimated, given the cost of new parts these days.

So, I am pleased to give the highest recommendation to Don, and his team for their honesty, skill, knowledge and their standards of excellence.
Professor Emeritus Merv Hyde AM PhD 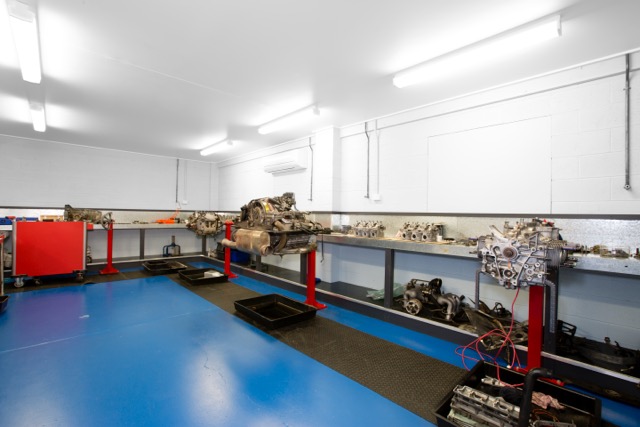